After Positively falling in love with , we continued on to – flying into and renting a car. The itinerary was to to to Rothenburg to to and back to ith stops along the way as time allowed.  It was a lot to try to cram into a short amount of time but we were going to give it our best effort.
Tuesday, May 8th found us in old , our first stop.  Situated along the river Necker, it is lovely with it’s rolling hillside, cobblestone streets and tile roofs, the castle towering overhead.  When it came time to go, I hated to leave , but we had to move on and I was assured of even better things to come. 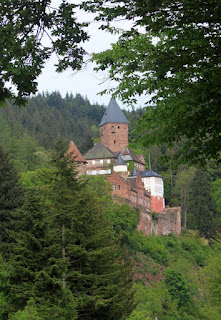 We made our way to  where we eventually found the house Rick had lived in as a boy.   Following the , I learned my favorite German word – schloss.  It means castle.  Castles rise from the hilltops every few miles it seems. Many are ruins of course, but a number of them have been restored and now house hotels or restaurants.  Whenever I’d spot one I’d point and yell “Schloss!”  Meaning of course that I wanted to stop and take a picture.  Sometimes, Rick obliged.
Our next stop was the walled city of ob der Tauber.  Dating back to medieval times, it is a fascinating and well preserved look into the past. We spent some time at the our floors of documents on laws and punishments and devices such as masks of shame, Iron Maidens, even a dunking chair for bakers who sold inadequate loaves of bread. There were an abundance of Shrew’s Fiddles and neck violins which joined together two arguing women until they learned to get along.  Even children could be humiliated and physically punished in school, made to wear dunce caps or sat on wooden donkeys, drunkards would be forced to wear a large wooden barrel to which could be added stone weights and women who were thought to be dressing above their station could be accosted on the street and punished by having their sleeves and dress trains trimmed on the spot by the town fathers.
In the town square, Rothenburg’s famous clock portrays the city’s history on the hour as the clock strikes and the windows open to reveal the mechanical scenes portraying the mayor’s legendary drinking of over three liters of wine (without stopping), in order to save the town from destruction back in 1631.


Unlike Rick, I had never been to Rothenburg before and I climbed the tower, descended into the dungeon and sampled schneeballen and spargel (asparagus) with gusto.  If I enjoyed the food in Paris, I enjoyed the German food every bit as much!  Bratwurst, schnitzel, strudel, kraut.  It was all good.  Lucky for us, spargel was in season.  Everywhere we went, roadside stands offered fresh spargel and restaurants advertised all manner of spargel specialties – crepes, soup, even a wine!

Wine was king in , but in it’s beer and every beer that was ordered was picture perfect - tall glasses of sparkling brew with foamy white caps.

After the festive atmosphere of Rothenburg we headed for and a completely different experience.  It stirred up some very mixed emotions.  Torn between wanting to see it and not wanting to see it, I wasn’t sure what to expect.  What we found was a well-documented memorial of an infamous period in history.  We learned much.  Dachau was the first of the Nazi concentration camps and was the model for those that followed.  Audio tours of take you along the same path a prisoner would walk upon being admitted to the camp.  Through the iron gate with it's proclamation 'Work Makes Freedom' into the open yard, through the main hall and the rooms beyond, where they were registered, gave up their papers, gave up their belongings, gave up their clothes – now filled with signs and photos and documentation of that awful time.
Surprisingly the grounds are peaceful – no feelings of foreboding or lurking evil as I expected - the guard towers silent witnesses to all that happened there.  Memorials and monuments dotting the grounds commemorate the persecuted and the fallen.  A wood and barbed wire gate separates the camp from the area that holds the crematorium and it is chilling to read the markers on that other side - the mass grave, the pistol range for executions.  It was humbling to be in this history laden spot.  As we walked out the gate to go back to our car we had one thought.  We were free to leave.

Back on the road, more castles in the distance, and the .  The white-capped peaks providing a picture perfect backdrop for barns and church steeples and schloss towers that rose up out of the countryside.  As we pulled off the road to take some photos of a particularly pleasing scene of a small lake we heard a sound and wondered if someone was playing a trick or if we really had heard it.  Cuckoo. Cuckoo. Cuckoo. Cuckoo.  We listened carefully and heard it again.  A real cuckoo bird!

One more stop in that Rick wanted me to see before we re-entered was .  We drove along most of it in the darkening light, trying to find a hotel or guesthouse that would be open.  In closing time is closing time and the doors are locked.  Having no idea what town we were in, we saw a light on and pulled over.  Yes they were open and yes they had a room.  We were elated, barely minding having to drag our luggage through the lobby, outside across the patio, up some stairs, across a narrow path and into a tower where we had to climb a circular staircase.  But we had a room!
The view in the morning when we woke was totally unexpected.  Our room overlooked the lake on one side and the grounds of the hotel on the other.  It was breathtaking.  Breakfast was included and was a full blown German offering of juices, cereals, yogurt, breads and meats.  We ate like royalty.
A walk along the water into the town was a delight.  Another place I was in no hurry to leave.  But leave we must.  Funny how the unexpected can often become one of the highlights of a trip.  We will never forget our night in the tower at the Bad Hotel in Uberlingen!
Back on the Autobahn  eventually turned into and we found and the airport.  It had been a positively awesome trip but now that we were headed home we allowed ourselves to be tired.  We had memories – and 2,000 photos.

Note: To see larger versions of any of the photos - just click on one! See more at http://fineartamerica.com/profiles/1-mauverneen-blevins.html?tab=artworkgalleries


“Twenty years from now you will be more disappointed
by the things you didn’t do than by the ones you did do.
So throw off the bowlines, sail away from the safe harbor. Catch the trade winds in your sails.
Explore. Dream. Discover.” – Mark Twain
Posted by Mauverneen at Tuesday, July 03, 2012