has been getting a lot of attention recently – the wedding of Will and Kate, the Queen’s Jubilee, and the BIG EVENT – the Summer Olympics.  Lucky people who not only get to see history being made, but the hustling, bustling, beautiful city of itself!
I had a 24 hour stopover in and wondered exactly what I could see in that short a time. After doing enough walking to give myself blisters on the bottoms of my toes, I can tell you that with a little advance planning you can actually see quite a bit.

Email ThisBlogThis!Share to TwitterShare to FacebookShare to Pinterest
POSITIVELY COLORFUL
by Mauverneen Blevins

“The best color in the whole world, is the one that looks
good, on you!” ― Coco Chanel

Ever get asked what your favorite color is? Maybe it’s one of your ‘secret questions’ that you have to answer when you forget your password. Most people probably answer right away. It’s not supposed to be a trick question. But me? I can never quite decide.

I like red – tomatoes, apples, watermelon, roses and fire engines.


But I like green too. And there are so many shades of green – mint green, moss green, forest green, emerald green, chartreuse. Grass is green, although not necessarily greener on the other side. Trees are green – at least in spring and summer. So are avocados. And lettuce. And Kermit. Is teal green? Or is it blue?

I was in the middle of getting my blog ready when my youngest daughter called to tell me they had to put one of their dogs to sleep. So I decided to dedicate this week’s blog to and to all of our pets who add richness to our lives by just being.


Somehow, when I was in the second grade, I acquired a goldfish.  I named it Marilyn.  It didn’t last long, but that was my first pet. After that I tended to stick with dogs.  We’ve had several over the years, my first being a little orange Pomeranian named . She was sweet and gentle and prone to seizures but she lived to a ripe old age.

Email ThisBlogThis!Share to TwitterShare to FacebookShare to Pinterest
Summer Vacation
by Mauverneen Blevins

Summer – the word positively steams with heat, especially this summer.  Summer school, summer camp, summer solstice, summer job, summer home and the dog days of summer. But I think what most people associate with summer is – vacation!  The kids are out of school so pack up the car and let’s hit the road.

Trips out West used to be a big thing for a lot of Midwesterners – probably still are.  I know some of my cousins made several trips out there when we were younger. My uncle had a movie camera and when they got back we always got to see them on Pike’s Peak in the middle of summer making snowballs, or scary videos of them riding the mules down into the .   My own memorable summer vacations as a kid included going to a Wisconsin dude ranch and a couple of trips to Mackinac Island, in .


There have been wars and revolutions throughout history in the name of Freedom.  I think sometimes we forget how dearly our own country paid for our .


We have a number of symbols of our freedom here in the – the flag, the eagle, the statue of liberty, among others. Betsy Ross is credited with sewing the first American flag.  (Did you know A flag expert is called a "vexillologist?")  It was also a woman, Emma Lazarus, whose poem "The New Colossus" appears on the base of the statue of liberty.  Francis Scott Key of course wrote the lyrics to the Star SpangledBanner, something that I hope is still being taught in schools. It became our national anthem in 1931.

I think the National Mall in is one of the most exciting places to see some of our monuments to freedom.  Laid out on about 1000 acres the mall really is the people’s place. The boundaries of the mall are the Capital building to the Lincoln Memorial, and the White House to the Jefferson Memorial.
Several years ago I was fortunate enough to spend some time walking along the reflecting pool, the section between the Lincoln Memorial and the – a good sized piece of real estate – and was totally impressed.  It’s a beautiful area, anchored by the two monuments just mentioned, with other memorials in between and further out.  On the other side of the Washington Monument is the two mile green mall where protesters often gather, exercising their right to freedom.  I wish every American could see our nation’s capitol at least once in their lives. Not only is it impressive, but it’s a wonderful history lesson that instills a sense of pride in being an American.

In , there is the Liberty Bell and Independence Hall and in there is the harbor and the Old North church where the lanterns were hung to alert the militia that the British were coming. In there is of course, the Statue of Liberty on , built on the site of the .


In there is with it’s carved faces of presidents George Washington, Thomas Jefferson, Abraham Lincoln and Theodore Roosevelt.  It was built as a ‘shrine to democracy' by Danish-American sculptor Gutzon Borglum and his son, Lincoln, although a state historian named Doane Robinson is credited with conceiving the idea of the sculpture.  It is far more impressive in real life than it is in pictures, with faces 6- ft tall or, to put it in perspecitve, the size of a 5 story building.

There is and Little Big Horn.


From sea to shining sea.


We enjoy our beautiful Monuments to Freedom as well we should and revere those graveyards that honor the fallen who have defended that freedom.  For they deserve to be honored.  And thanked. Profusely.


In the midst of our picnics of hot dogs, burgers and sodas, our dips in the pool or the lake or the boat ride on the river, in the midst of our brightly lit, loud, colorful fireworks, let’s all try to stop for a just a minute and think about what we are celebrating.  And then get back to dancing! 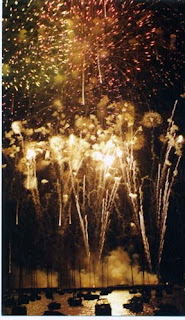 Those who deny freedom to others deserve it not for themselves.Abraham Lincoln

Freedom is never more than one generation away from extinction. We didn't pass it to our children in the bloodstream. It must be fought for, protected, and handed on for them to do the same.Ronald Reagan


As always, words and photos are my own and require permission to reprint.
However, feel free to share the blog in its entirety. In fact, I encourage it!

After Positively falling in love with , we continued on to – flying into and renting a car. The itinerary was to to to Rothenburg to to and back to ith stops along the way as time allowed.  It was a lot to try to cram into a short amount of time but we were going to give it our best effort.
Tuesday, May 8th found us in old , our first stop.  Situated along the river Necker, it is lovely with it’s rolling hillside, cobblestone streets and tile roofs, the castle towering overhead.  When it came time to go, I hated to leave , but we had to move on and I was assured of even better things to come.