Somehow, I just never put the two together. Tiffany Jewelers, Tiffany glass. They are Father and son.

The father, Charles Lewis Tiffany started out with a small stationery store/gift shop in . Several years later he and his partners had earned a reputation for selling only the finest of goods and began manufacturing jewelry. Becoming Tiffany and Company, they opened branch stores in and . The very name - Tiffany’s - has since become synonymous with fine jewelry. (An interesting sidenote on Charles: he teamed up with Thomas Edison to create footlights and other means of lighting theaters, thus enabling patrons of the day to further enjoy the theater.)

Lewis Comfort Tiffany was one of six children. Interested in art and painting, he became enamored with colored glass on a visit to a museum. Glass making hadn’t changed much over the years and Lewis Tiffany, an interior designer, wanted to use colored glass in his designs, rather than painting on clear glass, which was the established method. He invented, and patented, a technique called favrile glass, an iridescent art glass – a term he later applied to all his techniques. (Drapery glass is manipulated while the glass is molten to simulate folds in fabric, adding a three dimensional aspect.  Plating is using multiple layers of glass to create depth.)﻿
Tiffany believed in creating 'functional art' - pieces that were not only useful, but were also a pleasure to look at. On the other hand, he also created art for art's sake. His flowerform vases for instance, were designed not necessarily to hold flowers, but to be the flowers. In 1900 at the Paris Exposition - the World’s Fair that introduced escalators and talking films - Tiffany won a gold medal for his stained glass windows, The Four Seasons.

Art Nouveau was the fashion and the pieces coming from the Tiffany factory, notably the lamps, reflected the style. Some of those designs however, came not from the mind of Tiffany himself, but from his design studio, where he employed as many as 300 people in his studios and factory. Recent documentation is crediting Clara Driscoll, a talented, creative woman, for some of those designs, including the popular Dragonfly, Peony, and Daffodil lamps. Clara worked for Tiffany for 20 years, as a designer and head of the "Tiffany Girls" ( the Women's Glass Cutting Department). A widow when she was hired, she was forced to 'retire' upon her second marriage as married women were not allowed to work there.


Some 60 pieces of Tiffany designed windows, lamps and assorted art objects are currently on exhibit at the in crème de la crème of a private collection of 1500 pieces.  It is wonderful to see these pieces displayed in a setting from the era they were designed in and for.  Elsewhere in Chicago, Navy Pier has a permanent, free exhibit of stained glass, which also includes some pieces from that collection.  The newly renovated Queens museum in has a permanent Tiffany collection and The Morse Museum in Winter Park, FL has a Tiffany Wing which features some 250 salvaged art and architectural objects from Louis Comfort Tiffany's fabulous Long Island estate, Laurelton Hall, which was tragically destroyed by fire in 1957.  Included in their collection is the Tiffany Chapel, designed for the 1893 World’s Columbian Exposition in


﻿
If you think you’d like to collect a little Tiffany, be forewarned. There are lots of imitations and copies out there, not to mention reproductions and 'Tiffany-style' and not all original pieces were signed. Do your homework, go through an established, reputable dealer, and if you do find a genuine Tiffany piece - Enjoy it. Just don't forget the insurance. 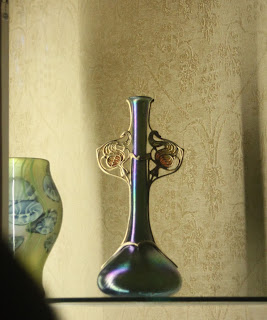 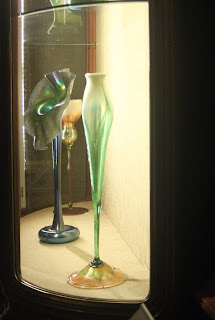 You can read more about the Driehaus Museum on my previous blog.


As always, words and photos are my own, and require permission to reprint.
However, feel free to share the blog in it's entirety. In fact, I encourage it!
Interested in photo prints? Contact me! maureenblevins@yahoo.com
See more photos at http://fineartamerica.com/profiles/1-mauverneen-blevins.html
and visit my website: http://mauverneen.com
Posted by Mauverneen at Tuesday, November 19, 2013