The blueberries are ripe!
About a 45 minute drive from where I live is a blueberry farm. When the berries are ripe, people descend on it like birds. You pick your own and pay for what you pick.  (TammenTreeberry Farm is so named because they also raise ‘christmas’ trees that people can come and cut on their own.)


Blueberry pie has always been my favorite, so I like to keep a stash of blueberries in my freezer for when the craving hits me. I also have an awesome blueberry cake recipe and who doesn’t love blueberry muffins! And they are very good to snack on. And if you’re into smoothies…. Ok, ok. YES. I love blueberries.


This year I was determined to make blueberry preserves. The only experience I have ever had with jam of any sort was the time I made crabapple jelly. Tasty stuff when done right. Too bad I didn’t do it right. When making jam or jelly it has to be cooked to the right ‘gel point’. With the crabapples it never seemed to get there so I just went ahead and bottled the stuff. As it turns out I had overcooked it. When it set, it was so solid I could barely dig it out of the jar! I ended up throwing it all out – jelly jars and all.


My daughter and I picked a good day to go berry picking - it wasn’t raining. But it was hot and headed for the mid to upper 90’s. And that meant humid. Ugh! We got an early start, wondering if it had dried up enough to let people in (they had delayed opening due to all the standing water in the fields) but the parking lot was already filling up. I had planned on throwing my into the car just in case, but of course forgot them. It would have been a good idea. Lots of other people had remembered to bring theirs.
They are very organized at the blueberry farm. Generally, after you have picked up your bucket you get on a wagon and are driven out to the section ready to be picked. This year we have had soooo much rain the roads were water filled. We were directed to walk down the muddy road a ways where we were then directed to where we could start the picking. They like to keep people together to pick one row at a time, moving on to the next row or section, as people arrive and the bushes get plucked.  All that rain must have been good for the berries. Some years they are kind of small, but this year – wow! The berries were huge. And sweet. 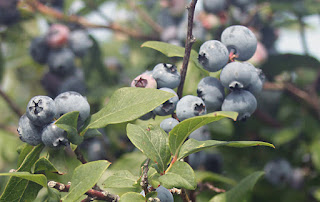 Blueberries have got to be the easiest thing to harvest. They clump on the bushes and come off by the handful. Of course you lose a lot too, as the ripe ones fall at the slightest touch. How sad to see those mounds of berries on the ground! All I could think of was those berry-less muffins…
It seemed to be unofficially ‘family day’ at the berry farm. Lots of people had brought their kids. But nobody was having fun. The little ones were hot and sweaty and whiney. And the parents were hot and sweaty and crabby. Rachel and I just kept on picking.


I had to let my berries sit a day, but I got up early to beat the heat and set about to canning them.


Still not sure about the ‘gel point’ I resorted to an old time tip. Dribble some juice on a cold plate, wait 20 seconds and run your finger through it. If it doesn’t quickly run back together it’s ready.
One tipped jar of hot jam! The front of the stove was now purple and there was a thick hot puddle on the floor. But I had no time to stop to clean it up, I had to keep moving that jam along!


The result? Twelve jelly jars, twelve mini jelly jars and a couple of extra containers I had no more jars for!


﻿
The taste is to die for! And the consistency is perfect.