﻿
About 45 minutes somewhat west of , where the countryside meanders through one cornfield after another, lies the Raptor Rescue facility SOAR (Save Our American Raptors). The center is run by George and Bernadette Richter - licensed Master falconers, rehabilitators, and educators. Originally from , they moved out to the country when traffic and population became too intrusive.


Entrance to the facility is by appointment only. A former garage-turned-visitor-center is used for classes in falconing, seminars, lectures and educational programs for park districts, nature centers, schools, scouts, churches, birding clubs – you name it. This particular morning it was a local camera club.

﻿
It was a crisp Saturday morning, and there was hot coffee waiting as about 30 people showed up, armed with cameras, tripods, and some loooong lenses. Following a brief introduction to birds of prey, we were led outside.﻿﻿
﻿


One by one the tethered birds were brought out by their handlers, and gently set atop a tall tree stump for their photo shoot. They all behaved like professional models - turning their heads this way and that, opening their wings to the warm sun. With every turn of the head, camera shutters clicked like rapid fire machine guns.


﻿
It was an educational morning. As each bird made its appearance, Bernie told us the story behind it and other birds they had nursed back to health. A Hawk, it’s beak shoved sideways after being hit by a truck, a starving Eagle, birds with broken wings or broken legs - more than a few left on their doorstep in cardboard boxes.


﻿
Most problems can be handled by George or Bernie or the local vet, but for serious cases they take the injured raptors to specialists in , or . They also work with the , which is well known for its outstanding work in raptor rehabilitation.


About 10 or 12 years ago, West Nile virus was ravaging bird populations in the and elsewhere. Crows, Robins, Blue Jays, Red-tailed Hawks and Great Horned Owls were especially hard hit. They died by the thousands and some are only now finally bouncing back.
﻿
None of the birds we saw that morning appeared nervous, seeming far less interested in us than we were in them. The owls looked like they would rather be sleeping and the red-tailed hawk was more intent on an ant that had found it’s way up to her perch. It made a tasty snack.

﻿
At the end of our session, we were treated to watching one of the birds fly on a long tether called a creance. 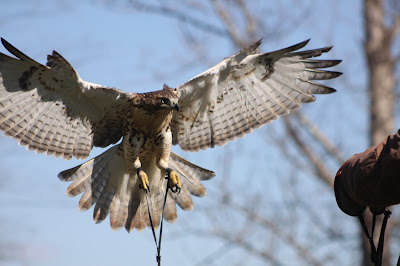 ﻿
Far overhead, floating on the wind we spotted a couple of hawks and a trio of bald eagles. As I left the SOAR facility, a Kestrel in a cornfield caught my eye. I felt a bit smug, knowing what to call it. I also felt thankful for birds in general, and for people like Bernie and George, who put so much time and effort into preserving these beautiful creatures.
For more information go to  http://www.soar-inc.org/ 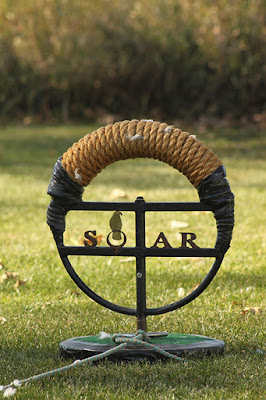 As always, words and photos are my own, and require permission to reprint.
However, feel free to share the blog in it's entirety. In fact, I encourage it!
Interested in photo prints? Contact me! maureenblevins@yahoo.com
See more photos at http://fineartamerica.com/profiles/1-mauverneen-blevins.html
I am always adding more!
and visit my website: http://mauverneen.com
Posted by Mauverneen at Tuesday, October 20, 2015