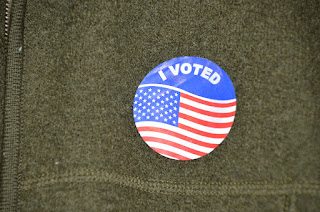 With all the hype and hoopla, I don't think anyone is unaware that today is Election Day. Here in the U.S, and in all free countries around the world, it is one of our greatest privileges. It's rainy and windy here today, so I hope the line doesn't extend outside the building where I need to go and cast my ballot. It doesn't matter whether you voted early or by absentee ballot or by standing in line. Just vote!
The Fifteenth Amendment (Amendment XV) to the United States Constitution prohibits the federal government and each state from denying a citizen the right to vote based on that citizen's "race, color, or previous condition of servitude". It was ratified on February 3, 1870.
The Nineteenth Amendment (Amendment XIX) to the United States Constitution prohibits the states and the federal government from denying the right to vote to citizens of the United States on the basis of sex. It was adopted August 18, 1920. Originally introduced in Congress in 1878, Congress submitted it to the states for ratification Forty-one years later, in 1919. It was ratified by three-fourths of the states a year later. New Zealand was way ahead of us. Women could vote in that country since 1893. The first state to grant women the right to vote? Wyoming. 1890.
As always, words and photos are my own, and require permission to reprint.
However, feel free to share the blog in it's entirety. In fact, I encourage it!
Interested in photo prints? Contact me! maureenblevins@yahoo.com
See more photos at http://fineartamerica.com/profiles/1-mauverneen-blevins.html
and visit my website:  mauveonthemove.com