Americans and their cars! The annual Auto Show is big news when it comes to but, truth be told, until this year, I had never been to it. It is one huge, glitzy showroom! 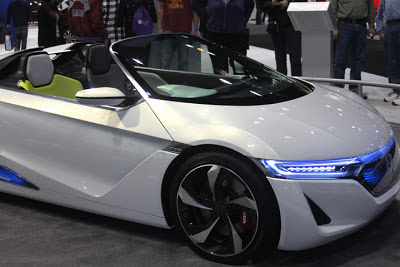 New models, concept cars and movie cars are always on hand, as well as a few classics. 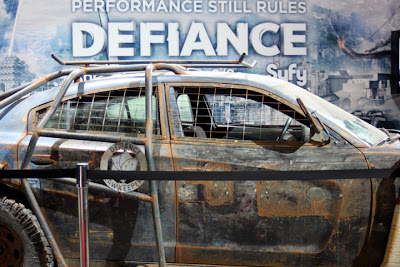 Ford had one of their classic pick-ups on display and Chevy had their Camaro. Several area car clubs had exhibits this year, including the Classic Car Club of America (of which I am editor of the IllinoisRegion’s newsletter, Up To Speed), Drive Chicago Classics, and the Illinois Camaro Club.
But the big news is always the new cars.
Some very bright colors were being shown for the new models and interestingly enough, several manufacturers were showing matte finish paint jobs! I am very curious to see how (or IF) that will catch on. Are auto aficionados ready to give up those shiny paint jobs? We’ll see.
There were contests to enter, giveaways to be had, accessories to buy and tracks to drive on. The waiting lines for the test drives were pretty long, but nobody seemed to mind the wait. They wanted their turn at the wheel!

Jeep took you over what looked like railroad ties, some pretty rocky ‘road’, and a steep incline. They even provided a second ‘track’ for the kids, where they could drive mini-jeeps. Much shorter line there but I did see a couple of collisions! Chrysler’s track featured an acceleration lane and a brake zone. Elsewhere in the show there were simulators or you could sign up for an outdoor test drive.


The first official show was held in 1901. It moved to its current venue of in 1961 and now draws over one million visitors during its run. No shows were held from 1942 - 1949 due to the war, when factories were making needed war materials, not cars. In 1916 all the cars on display were American-built, with seven electric vehicles being shown. Even the very first show in 1901 displayed electric cars. Kind of makes one wonder where along the way was that technology kicked to the roadside, doesn’t it.


I have to say, as a first-timer to the auto show, I did enjoy it but, as expected, the cars that most caught my eye were too expensive for my budget. Which is, unfortunately, where my tastes generally run – and not just in cars.
Of course I always enjoy those classics! Sitting in a 1947 Chrysler, I couldn’t help but close my eyes and imagine the wind in my hair as I drove on some quiet little country road meandering through small towns, with green hillsides and tall trees gliding past. It’s a good thing the keys weren’t in it or I’d still be driving. 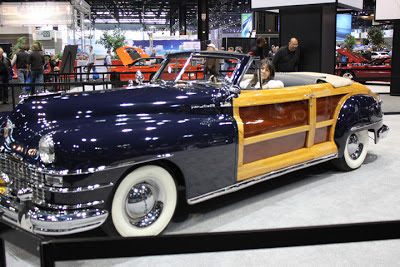 For more auto show photos, see my FB page. https://www.facebook.com/pages/Maureen-Blevins/#!/pages/Maureen-Blevins/123157059862
As always, words and photos are my own, and require permission to reprint. However, feel free to share the blog in it's entirety. In fact, I encourage it!
Interested in photo prints? Contact me! maureenblevins@yahoo.com
See more photos at http://fineartamerica.com/profiles/1-mauverneen-blevins.html
visit my website: http://mauverneen.com
Posted by Mauverneen at Tuesday, February 19, 2013