by Mauverneen
We almost didn’t go. The thought of getting up at dawn didn’t sound very appealing at the moment and my daughter and I debated whether it would really be worth it. We had scheduled an early morning balloon ride but we’d had a couple of very full days on our safari and now we were tired. We had seen so much – lions hunting, hippos bathing in the river right outside our tents, stately giraffes sauntering across the landscape, the wildebeest crossing – how much better could it get?
My son-in-law convinced us not to wimp out.

The early morning wake-up call; soft footsteps on the wooden deck outside my tent, a voice telling me it was four o’clock, the gentle clink of a pot of coffee being left on a tray outside my door.


A hippo ran across the road in front of our Land Rover as we left camp, crashing into the trees but it was still dark and we heard more than saw it. It was a 60 minute ride to the camp where we would ascend to the African skies. Still in the dark, we descended some stairs, took a canoe across the river and climbed back up the other side.


There was coffee as we were sorted into groups and assigned a balloon and a pilot. At least he kept us awake with his jokes.
I was surprised to find that the basket held 16 passengers plus the pilot. I didn’t expect it to be so big. There was an empty spot in our basket and our Masai guide, Jonathon, was invited to join us. We were thrilled that he could come along and Jonathon was clearly excited about the prospect of a balloon ride.


I had watched balloons being readied for launch before and the beauty of the flames and the brightly colored silk always impresses me. I’ve watched balloon ascensions, always wishing as they sailed away, that I could go up in one. This time, it was the ground sailing away from me.
I could not believe the utter feeling of peace as we glided quietly over the river and the bush. The sudden hiss of gas being released into the balloon made all 16 of us jump. David Kew, our pilot, did a good job of explaining how things worked, and explained he would try to keep us as low as possible without hitting any treetops – “After all, you came to see the animals.”

﻿
And we began to spot them. Hippos, giraffe, elephant, lions lying in the road watching us sail past. And the smile on Jonathon’s face alone was worth getting up early for. 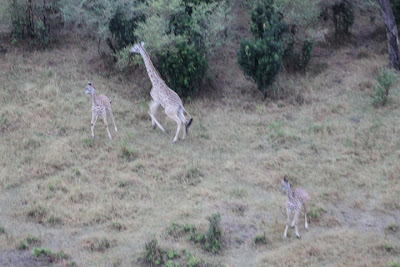 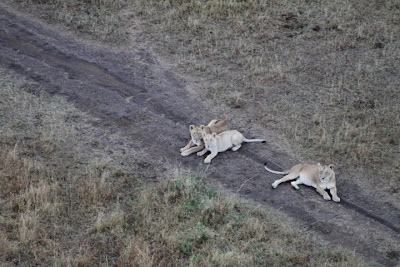 We were airborne for about an hour before we got our landing instructions and we took the landing position - seated, hanging on to the rail. We ended up on our backs bumping along over some very large anthills until we stopped and everyone clambered out, laughing. It was better than any amusement park ride I’ve ever been on.
As if the ride itself wasn’t spectacular enough, what awaited us was just as amazing. We sat on campstools in the middle of the Masai Mara, with nothing but grass and trees to be seen in all directions at a table covered with colorful cloth and set with china as a chef cooked our breakfast and we were offered coffee and champagne. 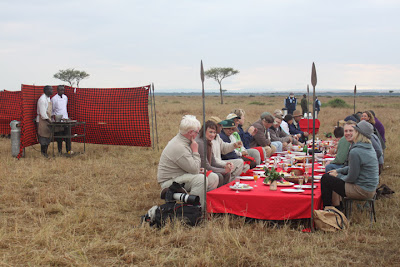 I still pinch myself occasionally, wondering how I got so lucky.


And to think we almost didn’t go.

As always, words and photos are my own, and require permission to reprint. However, feel free to share the blog in it's entirety. In fact, I encourage it!