POSITIVELY PARTYING IN THE LOWCOUNTRY

We were invited to a party. A party down in the Lowcountry of . I had been invited there before but the timing was never right and I was never able to make it. This time there were no excuses not to go. It was the impetus for a road trip.


After filling the tank with $4.39 per gallon gasoline I thought I probably could have bought a plane ticket for what I just pumped into the tank. But it was a road trip that was calling me so we filled up and hit the road. Tropical storm Andrea was threatening to cancel the party, but she blew up the coast quickly, leaving no major damage but plenty of rain.
The sun was shining when we arrived on mid-afternoon.

is one of the lowcountry islands whose roads wind around and through one island after another, with alternating views of open marshlands and roads lined with trees dripping with Spanish moss. We stopped at a roadside market where fresh cut flowers were being brought in from the field, and stopped again to admire some bird houses someone was selling from their front yard. We stopped and bought boiled peanuts from a roadside vendor – a local delicacy that we just could NOT try. I shuddered as we passed the Serpentarium but insisted on stopping to take a picture of the sign although I did not think I could bring myself to go in. And we stopped at the beach just to see the ocean.

We had a lovely dinner that evening at The Old Post OfficeRestaurant  – whose name pretty much tells you what you need to know, except that the food is delicious. From a menu with offerings such as Firecracker Flounder, Quail, Blueberry Chicken, and Crab Cakes, we chose Shrimp and Grits and a baked Flounder. We had no regrets. 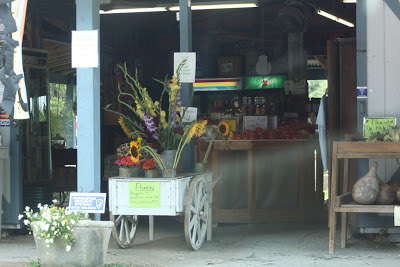 The party itself, the next afternoon, was a textbook case of Southern Hospitality, with fried chicken, hush puppies, pulled pork, corn on the cob and all the trimmings. It was hot out there in the lowcountry – very hot and very humid. The best spot was out on the boat dock, where a constant breeze kept it comfortable. Sitting there, we carried on conversations with other guests as we watched pelicans dive for fish and egrets wade through the marsh grass as dolphins swam past.

I could get used to the lowcountry I think. It has a quiet, calm beauty and the bird watching is amazing. I would love to go back and spend some serious time photographing the birds at one of the wildlife refuges and spend a bit more time just watching the ocean. But for right now, sitting on the dock, enjoying a glass of wine was enough. I had a great view of the party as guests strolled across the yard and I could hear the band that was playing in the garage. Life was good.


As always, words and photos are my own, and require permission to reprint.
However, feel free to share the blog in it's entirety. In fact, I encourage it!
Interested in photo prints? Contact me! maureenblevins@yahoo.com
See more photos at http://fineartamerica.com/profiles/1-mauverneen-blevins.html
and visit my website: http://mauverneen.com
Posted by Mauverneen at Tuesday, June 18, 2013