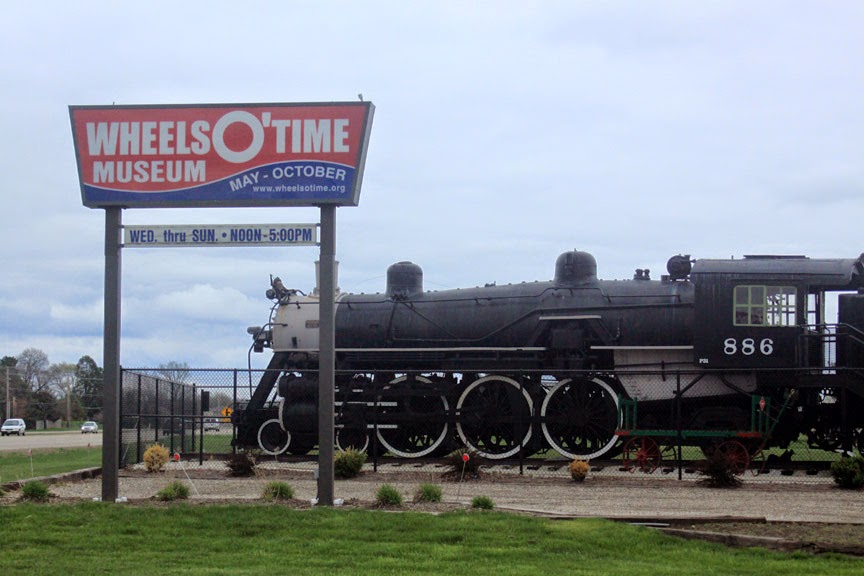 Just outside , , the little town of houses a surprisingly delightful museum. Called Wheels O’ Time, it is the lifelong work – and joy – of Gary and Jan Bragg.


It began in 1978, when Gary and his friend John Parks decided to join forces and build a garage to store their vehicles in.  Both were classic car aficionados – Bragg owned 6 or 7 and Parks around 15.  They built their garage and almost immediately began to attract visitors.  The rest, as they say, is history.


In 2013 they added their fifth building to house what has grown from a ‘car collection’ to an unbelievable array of antique cars, fire trucks, clocks, assorted antiques and a storage building to house items people routinely donate in the hope it can be added to the museum’s treasures.


The newest addition hosts a display of antique and classic Fords. Attended by volunteers of the Peoria Ford V8 club, which has partnered with the museum, it currently showcases several beauties, including a Model A that was a survivor of the tornado that devastated nearby in 2013.  What looked like a car that had been in great shape prior to the storm is now covered with dirt, has busted windows and a hole in the roof.

Also partnered with the local Historical society, many of the items inside have a ‘ connection’ such as the replica of Charles Lindbergh’s Spirit of St. Louis, built by a group of local high school kids and donated to the museum. Bragg accepted it, as was one of the stops on Lindbergh’s air mail route and he even made a crash landing in one of the nearby corn fields.


Other historic pieces include a Duryea and a Glide automobile - two early models manufactured in . Among the farm implements is an early tractor, bearing the names Holt and Caterpillar.

The Braggs consider themselves fortunate to be doing what they love.  Both now retired from previous professions, they devote countless hours to their museum. Volunteers help with the ticket office/gift shop and as tour guides.


About 30 percent of the visitors are repeat visitors.  Adults love the place because of the nostalgic memories it sparks. Your parents or your grandparents had that car, or that stuff in their kitchen, or a radio like that.


Kids love it because they’ve never seen some of those things before. And what kid, young or old,  doesn’t want to climb up into an actual locomotive!


The rooms are filled with memorabilia from a bygone era; model trains, dolls, a miniature circus that comes to life with the press of a button, a radio station that plays recordings of historic announcements. A clock shop.


The last stop on the tour was a visit to the train parked out front. The engine car and the caboose are open and visitors are encouraged to climb aboard, but the two cars have only been on the property about two years and are in the process of being restored.


As pulled the cord and blew the whistle I couldn’t help but wonder if he ever felt like a little boy who has his own train. Something in his smile told me I wasn’t far off.


If you go: The museum is easy to get to, well marked, and you can’t miss the locomotive out front.
http://www.wheelsotime.org/page4.html

As always, words and photos are my own, and require permission to reprint.
However, feel free to share the blog in it's entirety. In fact, I encourage it!
Interested in photo prints? Contact me! maureenblevins@yahoo.com
See more of my photos at  http://fineartamerica.com/profiles/1-mauverneen-blevins.html?tab=artwork
and visit my website: http://mauverneen.com
Posted by Mauverneen at Tuesday, May 06, 2014