My daughter and I decided to attend Witches Night Out. I had seen flyers in previous years and thought it would be fun but never made it. This year it moved from a downtown venue to the , a Gothic looking Renaissance Revival 3 story built in 1873. A cross between elegant and spooky - what better setting could there be?


As we drove up the street we passed witches in cars and witches on foot – nary a broomstick in sight. What fun to see groups of witches heading to a party.


Huge iron gates opened to the grounds, where witches mingled and danced and cavorted, drinking various brews – brandied cider and toadstool martinis among them. ‘Bonfires’ were scattered around the grounds – firepits, where witches could sit and conjure up spells or just chat with friends. 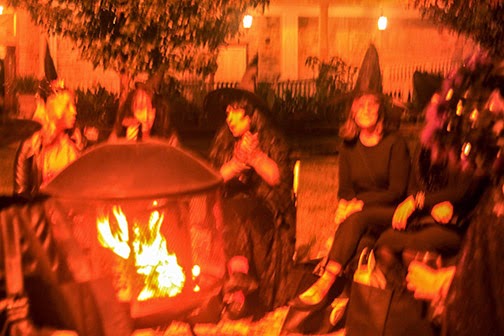 We both dressed as witches of course, but there are witches and then there are witches! More than a couple of these ladies went all out with their costumes. There was a red witch, one or two white witches and one woman came dressed as the sea witch from The Little Mermaid – complete with tentacles on the hem of her gown. I'm already planning next year's outfit.


Of course there is a costume contest with several categories; Best Hat, Best Over-all, Best Make up, Most Wicked and Most Creative. And the hats – some of them were pretty impressive. Vendors of all sorts filled the rooms of the mansion and the ballroom (a newer, recently added single story building used as a banquet hall) complete with a porch to sit on and witch watch. And of course there were tarot card readers upstairs in the mansion.


It was a good time for a good cause. The proceeds benefit several local agencies that help women in need. The Witches Night Out committee is a group of volunteers who in only five years have managed to raise a cumulative $100,000 for charity - proving that not all witches are bad.
If you find a witches night out in your neck of the woods – do try to attend. I’m sure you’ll have a positively bewitching time!


As always, words and photos are my own, and require permission to reprint.
However, feel free to share the blog in it's entirety. In fact, I encourage it!
Interested in photo prints? Contact me! maureenblevins@yahoo.com
See more of my photos at http://fineartamerica.com/profiles/1-mauverneen-blevins.html
and visit my website: http://mauverneen.com
Posted by Mauverneen at Tuesday, October 28, 2014