by Mauverneen
As I wandered the streets of the French Quarter on my recent visit I was so thankful that it had survived. What a tragedy it would have been to lose all of this – this history, this architecture, this joie de vivre that is . It is not nicknamed The Big Easy for nothing!
I had been to twice before – both times pre-Katrina. It had been too long.


It seemed as if nothing has changed in the nine years since Katrina, although I’m sure it has in ways that go far beneath the surface, but to the tourist like myself, it was still the I had seen before and fallen in love with.


The French Quarter, or Vieux Carré, is the oldest part of the city, and though it’s called the French Quarter (it was founded by the French), it’s architecture has a Spanish influence. Fires in 1788 and 1794 destroyed most of the original structures, and rebuilding was done when the Spanish ruled the city, thus the Spanish colonial style.

The streets are narrow, one way passages. European. And many of the buildings are painted in colorful pastels.


I love the balconies and the courtyards of the Quarter. Wrought iron balconies that overflow with greenery and color. Narrow walkways between buildings that lead to those private havens tucked out of sight; lush, green, peaceful islands in a landscape of concrete and brick. 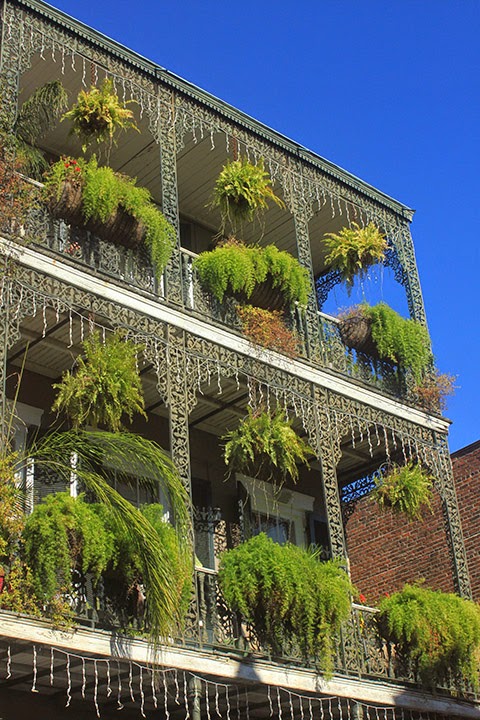 and St. Louis Cathedral are the centerpiece of the French Quarter. , originally called Place d’Armes, was renamed for General Andrew Jackson (who later became President) after the 1815 Battle of New Orleans and in 1856 became a park. It’s former purpose had been a military parade ground and occasional execution spot for criminals and runaway slaves.

The Cathedral is flanked by the Presbytere on one side and the Cabildo (the old City Hall) on the other. Both are now museums. One of the most famous of institutions is just across the street from . The Café du Monde, where long linesform in the morning of both tourists and locals seeking coffee and beignets. The is only a few steps away with a boardwalk alongside where anyone can stroll along the river and joggers enjoy a morning run.


One can spend hours just circling . Carriages line Decatur street, taking eager tourists on tours of the French Quarter, artists hang their works on the fence, plying their wares and creating new masterpieces, Tarot card readers, fortune tellers and musicians entertain passers by from early morning on into the night. Shops and restaurants occupy the ground floors of the identical Pontalba buildings that flank opposite sides of the park.

Of course, the entire Quarter is a haven for shoppers from the souvenirs of the French Market and Bourbon Street to the upscale art galleries and antique shops.
And for something a little different, there is the Frenchman Street Art Market - open only at night.
Next week: Beyond the Quarter

As always, words and photos are my own, and require permission to reprint.
However, feel free to share the blog in it's entirety. In fact, I encourage it!
Interested in photo prints? Contact me! maureenblevins@yahoo.com
See more of my photos at http://fineartamerica.com/profiles/1-mauverneen-blevins.html
and visit my website: http://mauverneen.com

Posted by Mauverneen at Tuesday, November 25, 2014