﻿
It’s always fun to learn something new about the place you grew up in. One of the things my hometown of is known for is - the prison. If you haven’t heard of it, just think the t.v. series ‘Prison Break’ or the movie the ‘Blues Brothers’. 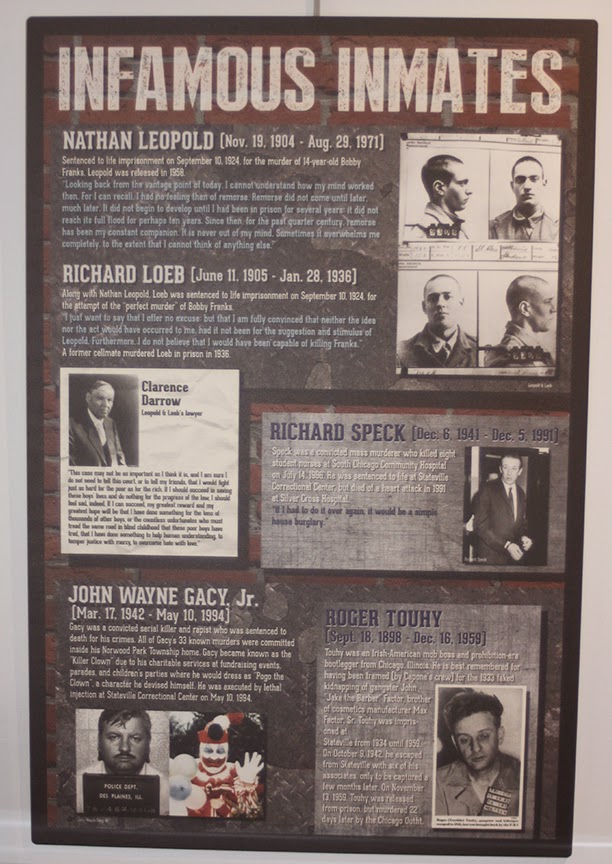 Already quite well known even before Joliet Jake of the Blues Brothers came along, it has reportedly housed the likes of Baby Face Nelson, Loeb and Leopold, John Gacy, and Richard Speck. Quite a dubious reputation.
When the recently advertised a lecture by Mike Johnson, a former prison guard, I was in.


﻿
Many buildings in this area are made from limestone, which we have in abundance. The prison walls and buildings were made from stone quarried right on prison property and built with convict labor. The location of the prison was also a deterrent to escape attempts. It was not so easy to tunnel through limestone.


That quarry is now filled with water and the prison cemetery, nicknamed Monkey Hill, has all but disappeared. Upwards of 500 prisoners were interred there, their wooden markers disintegrating over time.


I was never aware that there was a women’s prison there too. Originally, women prisoners were housed on the top floor, and reportedly let out in the exercise yard once a year, during which time the men were locked up. Later, a separate building was built just across the street to be a separate women’s prison (1896 – 1932) where they hopefully were allowed fresh air a little more often.
There is reportedly a ghost or two inside those walls. One of which is not  a prisoner, but the wife of one of the wardens. In 1915 Warden Ned Allen lived with his wife, Odette, and her small children in the warden’s house, located in the prison compound. On a Saturday in June, Warden Allen went to . Due to a quirky twist of fate, his wife did not join him. On Sunday morning fire was noticed in the warden’s home and Odette was found, her skull crushed, in her burning bed. The man charged and executed for that murder, a prisoner working as a houseboy, insisted to the end that he was innocent.
﻿
In July, 1932, news of a ‘singing ghost’  captured many a person’s fancy.  People reported hearing a man’s voice, singing. Always at night. Crowds grew on the road outside the prison grounds hoping to hear the eerie voice, and sure enough, they did. It was thought to come from the prison cemetery. After several nights of this, one of the night watchmen at the quarry, an inmate, finally realized he was the ‘singing ghost’. His lonely post had him crooning for his own amusement to pass the time, but in the still night his voice carried and echoed off the limestone walls so that no one could pinpoint where it came from.


As a young girl my grandmother lived in a house across the road from the field where the prisoners grew their own produce. One of them gave her a small wooden box that he had made in the prison shop. There are similar stories from others who have similar boxes.
Prisoners worked during their time incarcerated. The Joliet prisoners, besides cultivating their own gardens and having a woodshop, operated a pillow and mattress factory, made shoes, soap, and crafted wicker furniture that was then sold. One of the odder jobs to be offered to prisoners was data entry. For a time data entry was done for the Secretary of State’s office until someone figured out it might not be a good idea for convicted felons to be accessing that type of information.

Today, the old prison, opened in 1858, is sadly in disrepair and has been closed since 2002. There is hope that it will somehow be rejuvenated in some fashion, perhaps as a museum or a tourist attraction. Currently, the parking lot contains several informational signs and is already a stop for occasional tour buses, tourists and residents who just want to see what has happened to the place. It’s worth the stop. And so is a trip to the where the special exhibit on the old Joliet Prison runs through March, 2015.

For additional reading and information:
﻿
﻿