﻿﻿﻿
Hidden away down a gravel drive in bustling lies an architectural masterpiece.  Built in 1937-38 by an up and coming young architect named Paul Schweikher (1903-1997), the house is on the National Register of Historic Places and was recently recognized by the American Institute of Architects as one of the top 150 architectural sites in the state of . Conceived as both home and studio, the home's basic design was essentially a 2400 sq ft, three-room, open plan structure.


Built on the edge of a farm in what was then the town of  the land (7 acres) was given to the architect as part of his fee for his work in transforming a large barn on the Kern farm into a residence for the family in the mid-1930’s. (That house has since been destroyed by fire.)


Not knowing it's history, one would think the house had been recently built, with its low profile, flat roof, and boxy shape. Built of brick, glass, and wood, Schweikher's house was unique for its time - eco-friendly and mid-century Modern before such terms even existed. Schweikher is often attributed as one of the pioneers of passive solar technology.
Schweikher studied at the Art Institute of Chicago and Yale, worked at several prestigious architectural firms and exhibited work at the Century of Progress International Exposition in in 1933-34.


On a trip to , the Schweikhers were exposed to traditional wood houses, and it was on the trip home that Schweikher conceived the idea for their home, using Japanese influences in his design. He had recently won a monetary award from General Electric for designing an "industrial building of the future", and he already had the land, so he moved ahead with his plan.
The studio is attached to the house by an open breezeway. Schweikher later added on a cantilevered conference room extending 10 feet beyond the structure's foundation in one direction and five feet in another. He also added on a second bedroom to the house, to accommodate their son.


﻿
The structure is surrounded by a landscape designed by noted Midwestern landscape architect Franz Lipp and was the cover story of the May 1947 Architecural Forum magazine. Franz Lipp also designed the gardens and ornamental plant collections at Cantigny Gardens and Museum in Wheaton , IL.


The Schweikhers lived here until 1953 (15 years) when Paul took the position of Chairman of the Yale School of Architecture and the family moved .


The new owners were Alexander and Martyl Langsdorf. Their search for a home was frustrating, until they came upon the Schweikher home. Martyl converted Schweikher's studio to her art studio and she and Alexander converted the conference room, with its view of the Salt Creek, into their master suite. They did little else to the house.
Langsdorf was a Manhattan Project nuclear physicist and Martyl, a well-regarded abstract landscape artist. Alexander was one of 78 scientists who signed a petition asking President Truman not to use the atomic bomb. His fellow scientists asked if Martyl could design a cover for their bulletin, which she did, coming up with the "Doomsday Clock". 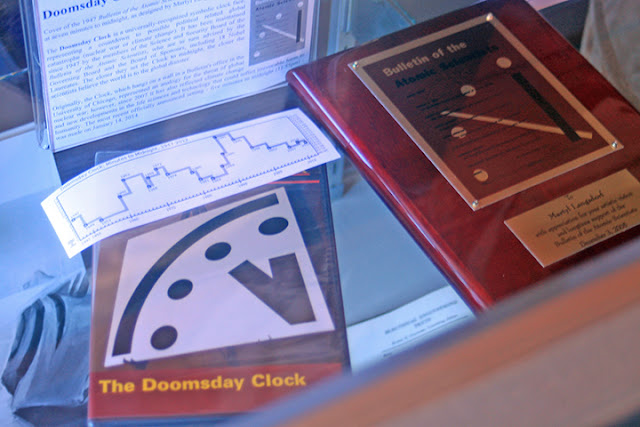 The Langsdorfs were also quite well known for their lavish parties, and guest lists included politicians, artists, actors and writers including, over time, 12 Nobel Laureates.


In the 1970s the Metropolitan Water Reclamation District began buying up land around them, and the Langsdorfs worked to register the house with the National Register of Historic Places in order to protect it. 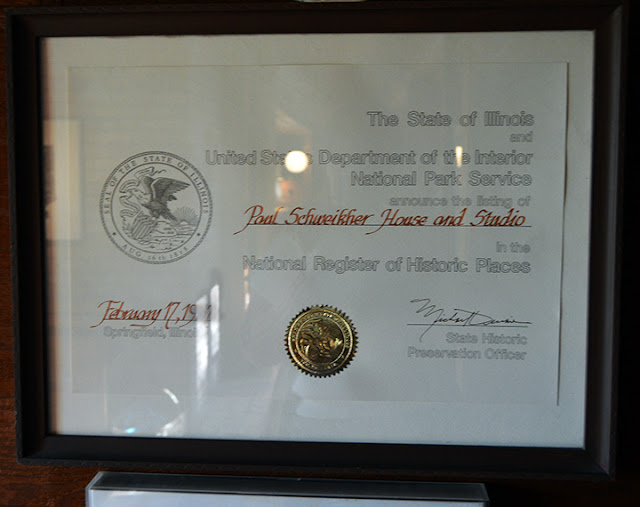 officials purchased the home in the 1980s, when the Water Reclamation District threatened to acquire the land and raze the house through eminent domain. then leased it to the Langsdorfs for life. In time the case went to court. The court ruled that the Langsdorfs could remain in the home until they died and the MWRD was ordered to make any necessary capital improvements to the home. Deciding not to pursue this line of action, they sold their interest to the , the current owner and caretaker of the property.
The house is shown ONLY by appointment. To find pub­lic tour dates (spring/summer 2016) or to sched­ule a pri­vate tour (1-hour tours/$35-per per­son) contact info@schweikherhouse.org or call 847.923.3866, M-F, 9AM-5PM.  http://schweikherhouse.org/
Additional information:
https://en.wikipedia.org/wiki/Paul_Schweikher
https://en.wikipedia.org/wiki/Doomsday_Clock
http://www.martyl.com/
https://en.wikipedia.org/wiki/Alexander_Langsdorf,_Jr.


As always, words and photos are my own, and require permission to reprint.
However, feel free to share the blog in it's entirety. In fact, I encourage it!
Interested in photo prints? Contact me! maureenblevins@yahoo.com
See more photos at http://fineartamerica.com/profiles/1-mauverneen-blevins.html
I am always adding more!
and visit my website: http://mauverneen.com