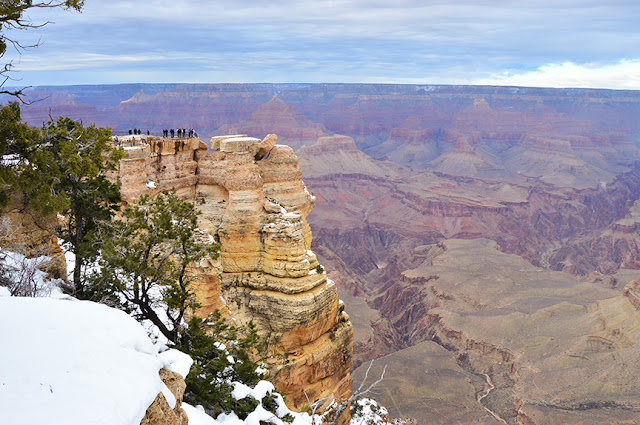 
It is beautiful. It is stunning. It is awesome. It is mesmerizing. Pictures cannot do it justice. For some, it is a spiritual, even mystical, experience. And for some, it’s just a place to check off the bucket list. Approximately 5 million people visit the Canyon every year. A mile deep, 277 river miles long, and an average of 10 miles across, there is no easy way to get from the South Rim to the North Rim (which is closed in Winter). To drive from where I stood on the South Rim in Grand Canyon Village to the North Rim's Village is over a 200 mile drive.

Although I had been there before, it is a place I don’t think I could ever tire of seeing. Taking a trip to , I vowed I would see it again. This time I wanted to spend the night in the park, as close to the canyon as I could get. I settled on the Yavapai Lodge. ﻿
I arrived late afternoon, in time to check in, locate my room, haul in my luggage, turn up the heat and head for the nearest overlook before sunset. As it turns out, I was not the only one hurrying to stake out a vantage point for either.
Both sunset and sunrise turned out to be magical times to view the canyon as shadow and light shifted across the rock formations. Rocks glowed in the golden light and purple shadows covered the deepest parts of the canyon. It snowed lightly off and on during the day, and clouds moved across the sky, looking ominous at times. 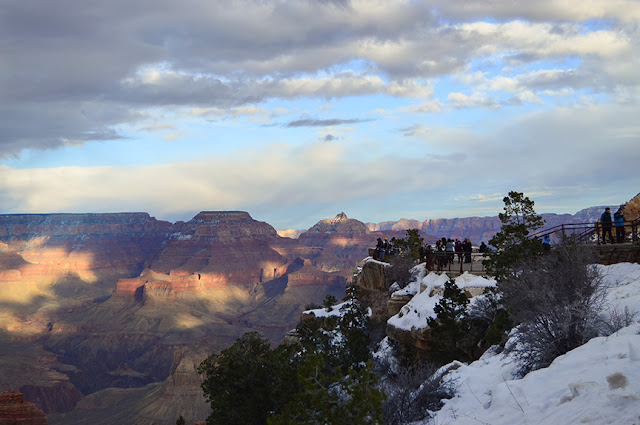 ﻿﻿
Getting around the canyon is easy. Well marked trails for bikers and hikers, paved roads with numerous viewpoints, and shuttle buses make it accessible to everyone. And though I drove, the train operates between Williams and the Grand Canyon, and the shuttle buses provide excellent transportation inside the park. ﻿﻿﻿﻿
﻿﻿﻿﻿﻿﻿﻿
I decided to treat myself to dinner at the El Tovar. And a treat it was. Be warned - reservations are a necessity! It's a lovely place and I browsed through the gift shops after dinner. I ordered the day's special - Steelhead Trout. I decided to pass on the wine, but one bite and I called my waiter back. A meal this delicious called for a glass of wine.
Driving along, I came upon a group of cars stopped alongside the road. I asked what was going on and was told there were Elk. It turned out there were several, mostly rubbing their antlers in tree branches. I tried, but it was nearly impossible to get a recognizable photo. I can tell you though, they are massive animals!  It was a real treat to see them.


As I left the park and turned my car south, towards Sedona, I reflected on my day. I had now seen the canyon in summer AND winter, I had seen deer, and birds I was not familiar with, was treated to an unexpected elk sighting and had seen the sun rise over the most magnificent canyon in the world. I was positively one lucky lady!

All photos are my own, unless otherwise credited
Interested in photo prints? Contact me! maureenblevins@yahoo.com
See more photos at http://fineartamerica.com/profiles/1-mauverneen-blevins.html
I am always adding more!
and visit my website: http://mauverneen.com
Posted by Mauverneen at Tuesday, February 23, 2016