I have wanted to take this trip for years now. I have been to several times, and absolutely love it there! Like anywhere, you can’t see it all in one trip and each time I go I see new things. The trip that was on my wish list involved taking the train to Flagstaff, renting a car, driving up to see the Grand Canyon, heading back south to Sedona, ending up in Phoenix and flying home. Which is exactly what I did.

I didn’t know too much about so I did some research prior to my trip, picking out a couple of things I wanted to see. Flagstaff turned out to be pretty cool and more interesting than I had anticipated.

Definitely a college town, it has an abundance of bicycles, breweries and coffee shops. Famed Rte 66 runs through the heart of it and just a few miles out of town are the San Francisco Peaks, a pair of them towering majestically over the landscape, providing a beautiful background to the town of . There are six peaks in all, circling the caldera of a volcano.

Historic downtown is contained within a few very walkable blocks full of shops, breweries, eateries and some nice old buildings. My eye problems and the search for a battery charger (as detailed last time) put me a bit behind schedule, but I still managed to see most of the stops on my list – and then some.


Rick and I visited two of Flagstaff's many breweries, the LumberyardBrewery and the Mother Road Brewery.
﻿﻿
﻿

Enticed by aromas in the air as we walked past the Lumberyard, we decided to make this our lunch stop. Despite a recent snowfall, people sat outside waiting for tables, as we did, feeling quite comfortable in the sun.

In 1994 Winnie and Evan Hanseth opened Beaver Street Brewery in downtown . Sixteen years later, just one block away, the couple restored one of the last standing buildings from 's lumber era to create the Lumberyard Brewing Company. The food was adequate (we opted for sharing a platter of nachos and the ‘Irish Egg Rolls’, the latter of which I would definitely recommend) and of course Rick tried a beer – settling on their popular Diamond Down Lager. Not being a beer drinker myself, I will not be rating the local brews, but if you like brews and brew tours, I would suggest could very well be the place for you!

Beer drinker or not, I was not leaving town until I found the Mother Road Brewery. I mean, we’re talking Rte. 66 here. If it was named for that iconic road it had to be worth a stop, right? Besides, I have a daughter and a son-in-law who brew their own (award winning I must add) beers. I felt an obligation to check it out even if I wasn’t into sampling. 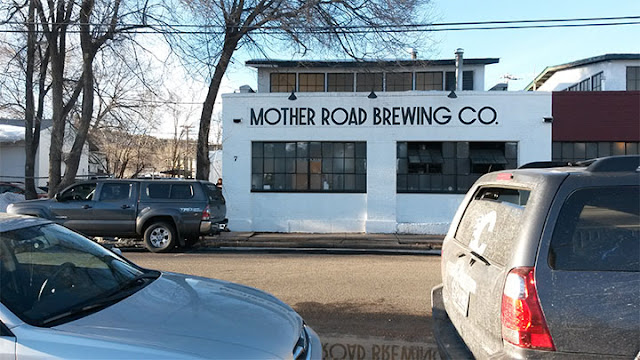 Located on a side street named Mikes Pike, the street is a section of the original U.S. Highway 66. In the late 1930’s Rte 66 was realigned one block west. The brewery, run by it’s young founders, Michael and Alissa Marquess, is in a small, unassuming building which once housed a commercial laundry and a parade of other, short-lived businesses. The building is also home to a Bicycle shop (Flagstaff Bicycle Revolution) and Pizzicletta, a pizza place. A few minutes inside the brewery and I was sorry I don’t drink beer. 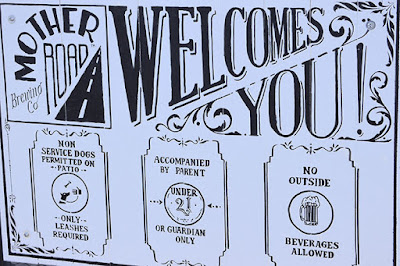 Small - very small - but obviously very popular, with an outdoor patio area and a tented space with pub tables and heaters for those colder days, it is one of those places that just pull you in and charm the inhibitions right out of you. The Ales and IPAs have names like , , Roadside American and , all fitting the theme of course.
﻿﻿﻿﻿
People were crowded around the bar itself, and both the patio and the tent were well occupied. Rick ordered his beer, trying the Roadside American Ale and later, Painted Desert (which he said was excellent) as I took it all in. To our utmost surprise, a keyboard was squeezed in between the brew tanks, with a quite competent musician named Arvid Ray at the keys. Joining him was Sammy Mac, a skilled harmonica player who regularly plays with a popular group called the Mother Road Trio. They jammed for a bit, happy for tips and applause. And beer.

﻿
﻿
Although the Tap Room at does not serve food, you are encouraged to order from Pizzicletta, and are even welcome to bring in your own meal to pair up with their beverages.
﻿
A fun, happy place! We hated to leave.

We continued walking around town, stopping in at ’s two historic hotels, the Monte Vista and the Weatherford. The Hotel Monte Vista opened it’s 73 rooms to the public on New Year's Day, 1927. Originally named the Community Hotel, the name 'Monte Vista,' meaning , was chosen by a 12-year-old contest winner. Construction was originally funded with investments and donations from prominent citizens, including Western novelist Zane Grey, who reportedly spent a lot of time there, both writing and drinking. The Monte Vista continues to be one of the oldest fully operational hotels in , is listed on the U.S. Register of Historic Places, and is well known for being haunted. Some of the famous guests who have spent time here were John Wayne, Clark Gable, Bob Hope, Carole Lombard, Michael J. Fox, and Jon Bon Jovi, to name only a few.
﻿
Just a couple of blocks away is the Weatherford Hotel. It opened it’s doors to the public in 1900. In the late 1890’s fires plagued the city and new construction was required to be of brick and stone. A sidewalk was also constructed around the hotel, a major improvement, as streets at that time were unpaved. Also on the register of Historic Places and another favorite haunt of Zane Grey, it has been through several incarnations, including years as a residential facility and as a hostel. Current owners Henry Taylor and Pamela Green have been preserving this historic landmark for over 30 years, adding fine dining to the venue in 1990.
﻿
John Weatherford also constructed an opera house on the same block. On December 31, 1915, 5 feet of snow fell on , crushing a number of buildings, including the Opera House. Rebuilt in less than a year, it is now the Orpheum Theatre.
﻿
Outside the hotel, suspended from the roof three stories up, is a giant pinecone. This six foot ornament is the star of ’s New Year’s Eve celebration, and has been since 1999. Much like the ball in , the Weatherford pinecone, decorated with holiday lights, is lowered at the appropriate moment to mark the New Year.
﻿
﻿
We had made one other stop during our tour of Flagstaff - the Riordan Mansion. We just missed the last tour, so we wandered about the grounds and the gift shop. A rambling, intriguing-looking  structure that piqued my interest, I decided it would definitely be my first stop in the morning before I hit the road towards the Grand Canyon.

At the end of our day in , Rick suggested we cap off our evening with drinks at the Weatherford before he headed for home. Charly’s Pub and Dining Room there offers a cozy ambience with a roaring fireplace and a mouth watering menu - a perfect spot to relax and recap the day’s events. Not very hungry after our late lunch we did however find room for a yummy dessert, one of their made-on-site specialties – a rich, chocolaty concoction - Almond Joy pie.
A rich dessert and a nice wine. A perfect ending to a very nice day. Flagstaff had surprised me. Next up - Flagstaff and beyond: A mansion, a museum, and what exactly is the snow bowl anyway?
﻿﻿


See more photos at http://fineartamerica.com/profiles/1-mauverneen-blevins.html
I am always adding more!
and visit my website: http://mauverneen.com

Posted by Mauverneen at Tuesday, February 09, 2016