Halloween is a fun holiday with costumes, masks, jack-o-lanterns, treats and tricks. And candy. Lots of candy. When I was a kid we had two full evenings of trick or treating, giving us lots of time to hit other neighborhoods – or our own more than once. We dressed up, went begging in bunches door to door, and sorted out the chocolates from the suckers and the Good & Plenty. My neighborhood didn’t give out a lot of chocolate and many a mask was a brown paper bag with a face drawn on and a pair of eye hole cutouts.


By the time my kids were trick or treating, their begging hours were pretty much reduced to one short evening, everyone seemed to have a costume and the parents had to sort the candy in case there was anything – ‘unusual’ in it.


Costumes were my specialty. I loved helping my girls put something fun together. We all love to dress up. And carve pumpkins.

Would you believe the original jack o'lantern was - a turnip?
The Irish gave us the jack o’lantern and although some details vary a bit it’s essentially the story of ‘Stingy Jack’.
It seems Jack tricked the devil - not once, but twice.  The first time Jack and the devil were having a drink together at the local pub.  Jack, being stingy, did not want to pay so he convinced the devil to temporarily turn himself into a coin which he would use to pay the bartender.  However, Jack pocketed the coin.  He also happened to have a cross in his pocket, which prevented the devil from changing himself back.  Finally Jack agreed to free the devil in return for the promise that he would not come after Jack for 10 more years.
In 10 years the devil and Jack met again.  This time Jack talked the devil into getting some apples out of a tree.  While he was up in the tree Jack carved a cross into the bark thus preventing the devil from coming down and extracting a promise from the devil that he would never take Jack’s soul.

Eventually Stingy Jack died.  Having led the sort of life he had, he was refused admittance into heaven, but when he got to the gates of hell, the devil wouldn’t let him in either as he had promised Jack he would never take him.  So Jack was doomed to wander forever in darkness.

﻿
Afraid, Jack asked for at least something to light his way.  The devil, not very happy that Jack had bested him twice, tossed him an ember from the flames of hell, which Jack placed in a hollowed out turnip.  Turnips you see were quite abundant in and readily available from any farmer’s field.


He became known as Jack of the Lantern, or, Jack o’Lantern.  For centuries the Irish would place coals or candles in hollowed out turnips, potatoes and gourds.  They believed that ghosts could leave their graves on Halloween night to seek out their former homes.  Which is why they placed the jack o’lanterns out – to ward off the spirits.  They figured even the spirits wouldn’t want to come near the doomed, homeless soul of Stingy Jack.

When Irish immigrants came to , they brought their legends and customs with them.  Turnips however, were not as abundant as they were in .  But pumpkins were.  And pumpkins were easier to carve out.


In fact there were no pumpkins in .  They are native to . 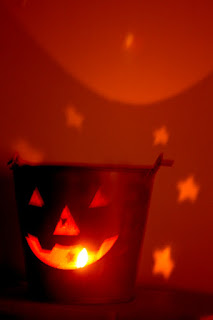